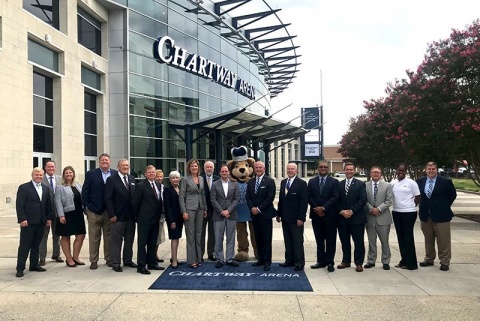 As part of the partnership, the interior of the 8,400-seat arena in Constant Center is now named Chartway Arena. Chartway will also become the official credit union of ODU Athletics. The agreement also establishes the Chartway-Constant Athletic Scholarship Fund, which will award $25,000 in scholarships annually to student-athletes.

In addition to giving back to the community through the scholarship fund, Chartway will offer ticket discounts to members, early-event purchase opportunities, giveaways, and more.?

“We’re proud to be expanding our relationship with the largest university in Hampton Roads,” said Brian Schools, Chartway president & CEO. “As an organization deeply dedicated to making life more affordable and strengthening the communities we serve, it’s an honor to support education and the broader local community through this partnership.”

Ribbon-Cutting Celebration: Officials from Chartway Federal Credit Union and Old Dominion University and recently held a ribbon-cutting ceremony to celebrate a 10-year marketing and branding agreement for the 8,400-seat arena in the Ted Constant Convocation Center complex.?The interior of the Ted will now be named Chartway Arena in recognition of the agreement. Chartway will also become the official credit union of ODU Athletics. The agreement also establishes the Chartway-Constant Athletic Scholarship Fund. The fund will award a total of $25,000 in scholarships annually to student-athletes. The fund will continue each year throughout the contract. Photo David B. Hollingsworth/ODU