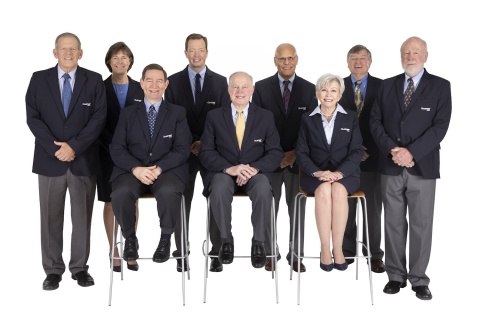 Virginia Beach, VA (March 28, 2019) – Chartway Federal Credit Union is proud to announce that on Tuesday, February 26, 2019, it held its Annual Meeting at its Headquarters in Virginia Beach, VA. During this time, the following individuals were re-elected by acclamation to the board of directors:

Robert O. Holmes, re-elected to 3-year term: Holmes joined Chartway as member in 1965. He has been a volunteer since 1998 and a member of the board since 2006. He also served as chairman of the board from 2016 to February 2019, and has contributed to the following committees: Human Resources, Asset/Liability Management, Directors Scholarship, Legislative/Regulatory & Advocacy, New Services, Technology, Nominating, Pension Investment, and Elections. Additionally, he has participated in Chartway’s Volunteer Advanced Training Program. Holmes is a retired commander with 35 years in Naval Reserves and is a Vietnam-era veteran (U.S. Navy). He also served as the civilian personnel director of the Norfolk Naval Shipyard, serving a population of 8,500 employees before retiring in 2004 after 41 years of federal service. Holmes earned a Master of Science degree (concentration in personnel management) from GeorgeWashington University.

Nancy W. McMahon, re-elected to 3-year term: McMahon is a credit union volunteer who has served onChartway’s Legislative / Regulatory & Advocacy committee, Volunteer Recruitment Recognition committee, and Supervisory committee. She also serves on the Virginia Credit Union League’s grassroots committee. Before becoming a credit union volunteer, McMahon worked in human resources for the federal government for 38 years, serving a number of federal agencies, including the Department of Defense and the Department of the Navy. Currently, she works as a part-time human resources consultant. McMahon holds a Bachelor of Arts degree in human resources administration from St. Leo University, and has completed extensive graduate work in public administration at Old Dominion University.

Melvin S. Mizelle, re-elected to 3-year term: 2019 marks 36 years of volunteer service with Chartway, including a term as chairman of the board from 1997 to 2001. He has also served as treasurer of the board and served / chaired a number of committees, including the Asset/Liability Management committee and Legislative/Regulatory committee. Mizelle retired as the deputy director of the human resources department at the Naval Aviation Depot in Norfolk, VA, after 37 years of continuous service.

Jared B. Perry, re-elected to 3-year term: Perry has worked with Chartway for several years, both as partner of Chartway’s charitable arm, the We Promise Foundation, and as a member of the credit union’s Legislative/Regulatory & Advocacy committee. Perry’s desire to serve began in the U.S. Senate, where he worked as a legislative correspondent for Senator Orrin Hatch and then senior advisor for Senator Bob Bennett. Following his government service, Perry served as the director of development for the University Hospital Foundation at the University of Utah before he became the organization’s executive director. Currently, Perry helps bring hope, strength, and joy to children battling life-threatening medical conditions as the CEO of Make-A-Wish Utah. Perry has a Bachelor of Arts degree in business management and a Master of Public Administration degree - both from the University of Utah.

The credit union looks forward to continuing its strong tradition of leadership with CAPT George E. Sauer III, USN (Ret.) now serving as chairman. Sauer has been a member of Chartway’s board since 2008. He began his service to Chartway in 1987 as the military liaison officer. His tenure as a volunteer expanded in 1991 with his three-year appointment to the Supervisory committee. In addition, he most recently served as chairman of the Strategic Planning committee and was a member of the Asset / Liability Management committee, the Governance & Policy committee, and the Executive Compensation committee. He previously served on the Legislative and New Services committees and was vice chairman of the Directors’ Memorial Scholarship committee. Sauer earned a Bachelor of Science degree in naval science and mathematics from the United States Naval Academy, and a Master of Science degree in administration from George Washington University. During his time in the U.S. Navy, Sauer was the business manager for the Norfolk Naval Shipyard, the supply officer of an aircraft carrier, the director of accounting at a Navy inventory control point, and the executive officer of a naval ship. Additionally, Sauer served as the operations officer for two retail companies. He has been a volunteer for Princess Anne High School’s choral department since 1996 and an adjunct business professor at Tidewater Community College.

As one of the largest credit unions in the country, Chartway is dedicated to making life affordable for its members, to serve its communities, and to make investments that strengthen the member experience.

Chartway Federal Credit Union, a not-for-profit financial institution, has been proudly serving members for more than half a century. Guided by its vision, mission, and values, the $2.2 billion credit union is dedicated to making life more affordable for its 190,000 members through more than 30 branches and online, mobile, video, and telephone banking services, including mobile deposit, mobile bill pay, and digital wallets. As one of the largest credit unions with membership concentrations in Virginia, Utah, and Texas, Chartway is consistently recognized for its financial strength, its ability to make life affordable for its members, and for its philanthropic efforts through its charitable arm, the We Promise Foundation, which has raised more than $11 million to provide life-changing experiences that bring joy, hope, and smiles to children facing medical hardship or illness. For more information, visit www.Chartway.com; or, visit them on Facebook, Twitter, or Instagram.